Why the Term 'Faux-Pas' is a Faux-Pas 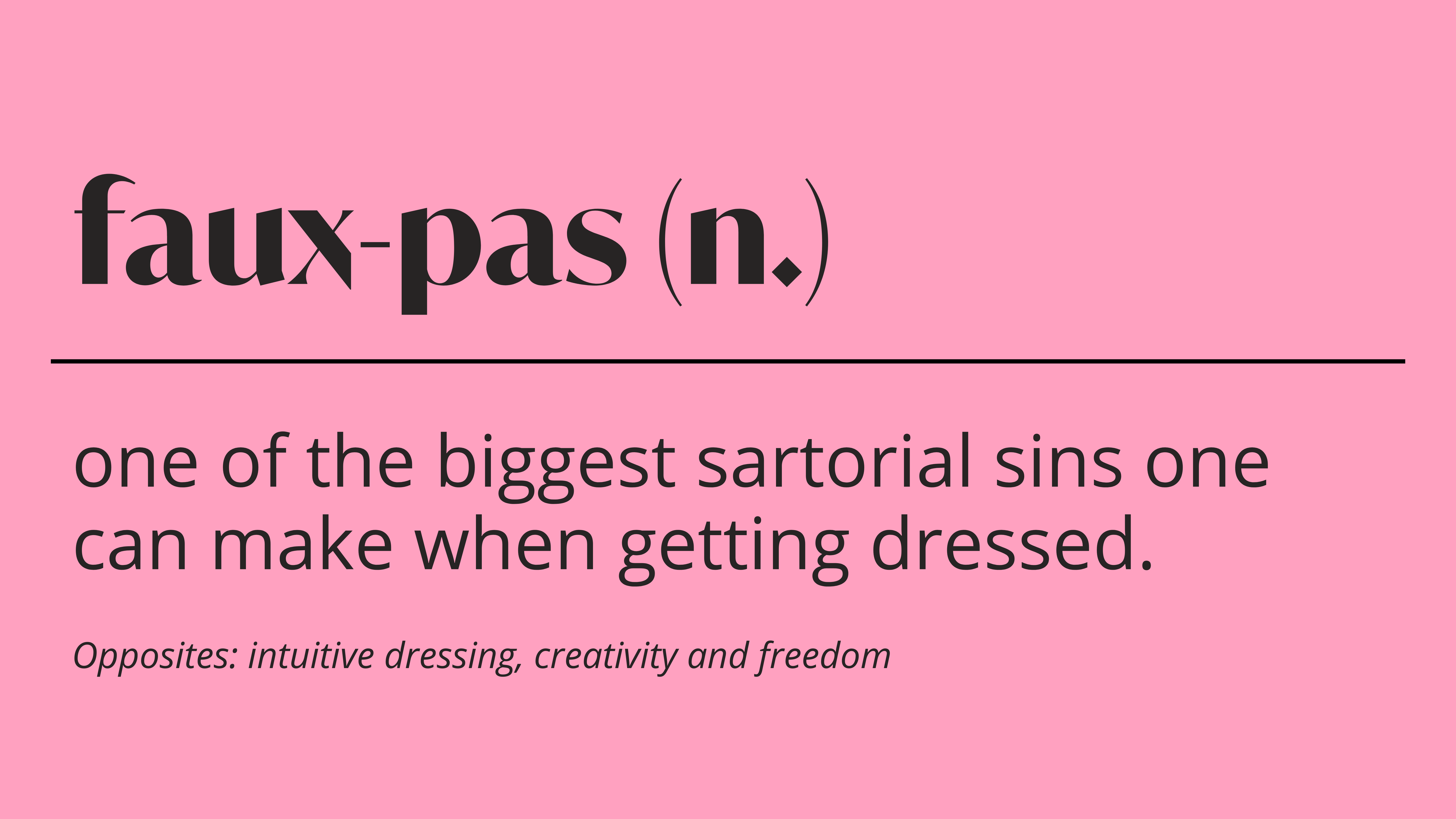 Let’s talk about the do’s and don’ts of fashion, shall we? At this point we’re becoming predictable, but as you might have expected, we’re back again this week to break some wardrobe myths with you. I guess we’re kind of like the Myth Busters, but with more existential questions, significantly less facial hair, and we’d definitely change outfits between episodes.

As we’re all aware, the world- and I won’t even try to boil it down to the fashion world- is full of people who will tell you that there are certain rules you need to adhere to. Whether we actively notice it or not, we’re constantly bombarded with rules and moulds we supposedly need to fit within every single day of our lives- whether it has to do with how we act or how we present ourselves, there’s definitely a chapter for it in that etiquette book your mum likes to quote. Do accentuate your waist, do wear your hair up and out of your face, do wear opaque tights (that’s what ladies do)… but don’t wear black and navy or pink and brown, and don’t you dare even pay a thought to socks and sandals. Make-up should be minimal and natural, but never be bare-faced, and your nails should be long but not too long- then it’s tacky. The margins within which we’re allowed to sit seem to narrow the more style and body shape quizzes we take; we briefly touched on this topic last week in the capsule wardrobe article, but decided that it deserved a more in-depth feature into the psychology of it all.

Not too long ago, some Team Whering members and I attended a panel event all about the future of e-commerce. To paint the picture, it was a Vogue Business event, full of industry professionals, but also young people in trendy fast-fashion outfits, who took their phones out to snap a picture of the ex-ceo of ASOS as he walked onto the podium, as if making bank off of selling poor quality garments and underpaying your workers was something to celebrate or idolise. After the talk ended and as people queued up for cocktails, I made an acquaintance with a lovely woman who was there doing research on the topic of sustainability. We quickly realised that we had similar interests and got to talking about mindful shopping, and how this can be achieved in today’s day and age. She mentioned a colour test she did a while back that helped her identify which colours better suit her (you know the one- it categorises you in a season & a descriptor such as deep, cool etc), and how since then, shopping for clothes had become so much easier, since she knew what did and didn’t look good on her, which colours made her complexion pop and which others washed her out or dulled her shine.

“It’s just completely rid me of my decision fatigue- I now know exactly what to reach for at a store, or in the morning when I’m getting ready” (don’t quote me on that, I wasn’t there to interview her and was already two picantes in).

While I admired her efficiency and confidence in knowing what she does and doesn’t want, my friend (also known as the girl currently co-writing/ editing this article- hi guys! Who knew these articles were a collaborative effort?) brought a different perspective to the table:

“The thing I don’t like about these kinds of tests, like the colour test, is that they try to tell me what I should and shouldn’t like myself in. While brown or black might not be the best suited colour for me in terms of accentuating my features or complexion, as odd as it may sound to some people, it’s my happy colour. And I don’t like the idea of someone telling me whether or not it should be, it just is”.

We all nodded our heads in agreement. She had a point- what if I don’t dress to look good to other people? What if I dress to feel good, for myself? What if my favourite outfit happens to be one that, scientifically speaking, dulls my shine and does nothing to make my eyes pop? What if I’m a Cool Winter stuck in a Warm Spring shell? While these types of categorising questionnaires are always useful to be considered out of pure curiosity, they don’t need to be followed to a T (or at all, for that matter). 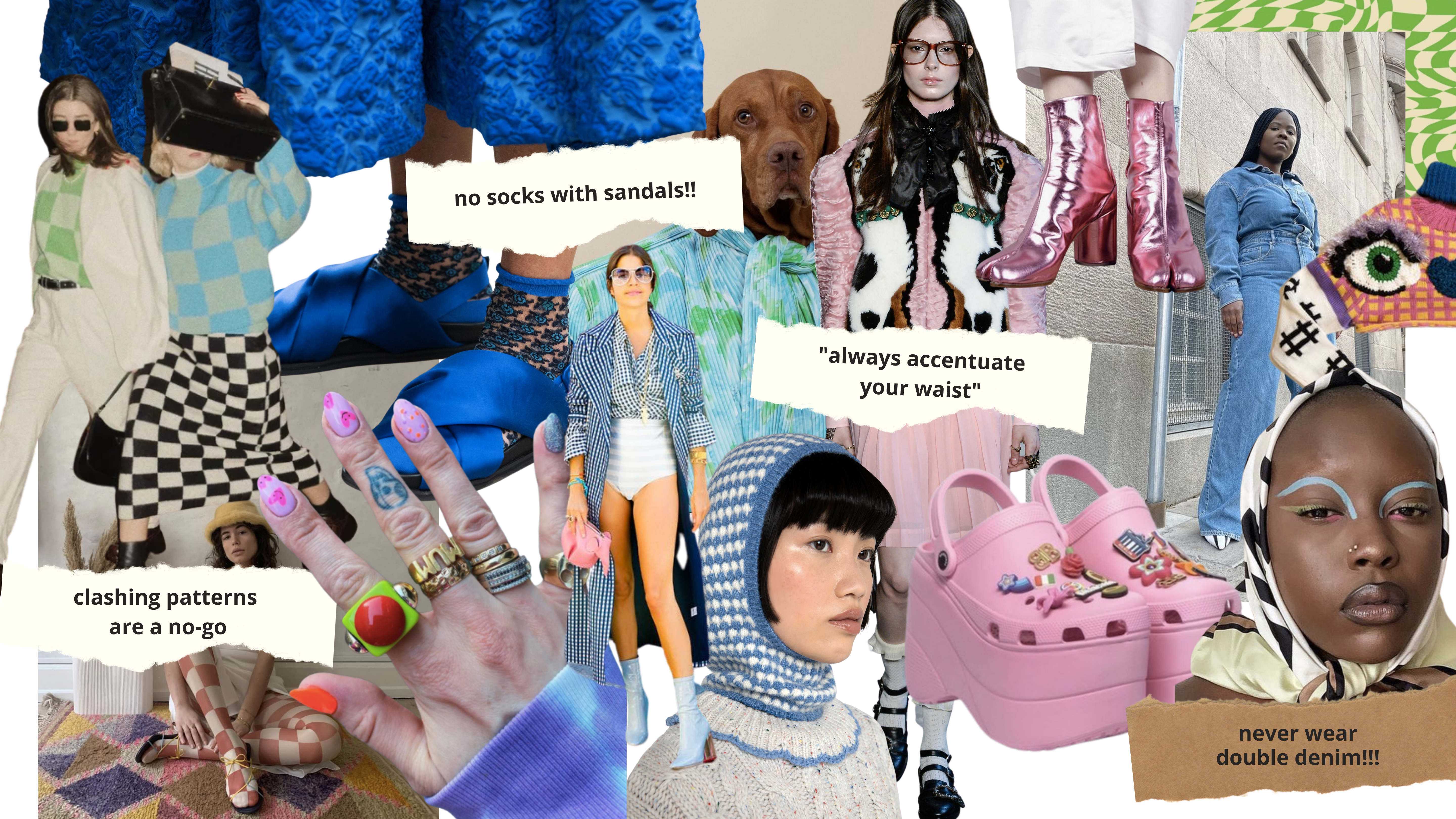 A conversation we often have in our virtual Whering meta-office is whether our aim with the app is to help make people ‘better dressed’ or whether to make them feel more comfortable in what they’re wearing by helping them explore the infinite possibilities of the wardrobe they already have (a wardrobe doesn’t happen overnight- you spend years collecting pieces you own today, and you chose them for a reason- own it). The idea of being well-dressed is so subjective and personal, that anything outside of your personal realm is essentially a costume. If my aforementioned cool-tone-monochrome wearing friend started wearing the colours that were recommended to her (which, by the way, are Christian Girl Fall/ Dark Academia colours since she’s a Deep Autumn), it might visually make her appear less sickly, but it wouldn’t be… her.

All jokes aside, is being well-dressed something that can be defined, or is it all in the attitude? By default, your attitude improves and your mood is immediately lifted when you genuinely like what you’re wearing, regardless of whether or not it fits the formula to make you look tanner, taller, more this more that, and more *insert other comparative adjectives*. This is just a small example in a haystack full of fashion-related limitations, all of which are entirely set by people who do anything to limit themselves in order to fit a certain mould (often internalised after being imposed on them by their mothers and their mothers’ mothers, who in turn were shaped by an extremely patriarchal society, making them believe them they’re worthless unless they look like a prehistorical sand clock), people who see themselves as superior because they’ve fully memorised and live by a rulebook that may as well be called ‘how to dress like every other b*tch’. While I’d like to imagine that the world we live in today is becoming far more accepting in terms of outrageous stylistic endeavours, we haven’t rid ourselves of the concept of faux-pas just yet. There will always be someone critiquing your ‘confused’ outfit, telling you that UGG boots should never be worn outside the house or pointing out your bra strap making a cameo appearance at a family gathering. You will never be able to please everyone, so why bother at all?

We spend hours taking all sorts of quizzes to find out our colour palette, the fruit or object that best describes our body shape, we curate capsule wardrobes all in the hopes of narrowing down our options to appear more approachable, more in-tune with the world, to look more palatable and more breedable. Thank god that I found out about my pencil body shape- does it come with an eraser for my personality?

Funnily enough, the opposite of ‘faux’ is authentic, real and genuine. Dressing in a way that feels intuitive is key in feeling comfortable in your own skin, and your clothes (your second skin, if you will), which is far more important than following guidelines set by someone who had way too much time on their hands. Rules were made up by confused people trying to rationalise something that isn’t meant to be rational (I’d bet money on the inventor of the faux-pas being an earth sign), so this is your cue to break them, if you haven’t been doing so already. If wearing a skirt that’s too short is so bad then why does it feel so good? Imagine how boring literature would be if all writers, who have always been told poems need to be aligned to the left, properly punctuated and capitalised, did what they were told and stayed in-line? Nobody has ever made an impact without thinking outside the box, so don’t let that insecure person telling you how you should or shouldn’t dress make an impact on you. You do you, bestie.